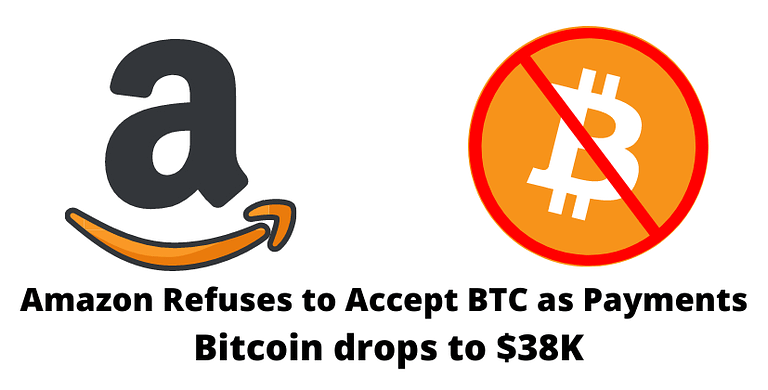 The Coin Leaks News: The cryptocurrency king has been hit by another crash, with the rate of 3.3 percent decline in 24 hours. Bitcoin is trading at an average of $38,210 this is the lowest level so that far this year when US president Joe Biden signed an executive decree regarding crypto rules.
While the BTC price increased to 40,800 dollars on the Tuesday of this week, the price dipped for a short time immediately afterward.

Amazon’s retractions against the massive belief that the retailer will soon accept BTC payments is the major cause of the abrupt drop. Ether was pushed even further downwards.

BTC price skyrocketed as Amazon advertised a job opening related to cryptocurrency. But, just a few hours later an Amazon spokesperson dispelled claims that Bitcoin will be used to the list of payment options in the coming year.

Bitcoin was at its highest point of US$40,545 when investors made their bets, fueled by the idea of a bearish trend. The market saw more than 950 million worth of cryptocurrency shorts being liquidated, the highest since May of this year.

The volatility seen by Bitcoin as well as other cryptocurrencies is described by the term “multi-wave” correction. The peak occurred in April, and is predicted to increase to an upper limit of $45,000 before falling further.

The turbulent ride of BTC is a part of this correction. The crypto market experienced huge losses after it hit an all-time highest of $65,000 due to the flurry of regulatory and environmental issues.

The frantic movements this week of BTC as well as other tokens is anticipated. In the meantime, investors are anticipating the next big storm that will break BTC from its trading range of $30,000-$40,000 over the last few months.

Where is Bitcoin headed?

The risk-to-risk ratio is slightly higher this week due to the fact that it is expected that the Federal Reserve is set to announce its decision on Wednesday.

Further, news of the investigation of possible bank fraud committed by Tether executives has left the crypto market on the line.

BTC investors have been struggling with environmental, inflation, and political issues, particularly with the Fed. The inflation rate recorded in March of this year is far and away from the most severe inflation rate in comparison to the one that occurred in 1981.

Many factors have been driving volatility in both markets for crypto and stocks.

This price band is believed to be a middle point for Bitcoin because its performance will decide the course of events over the next couple of days. Will it be positive or negative? BTC performance in this level can give traders insight into where it’s heading.