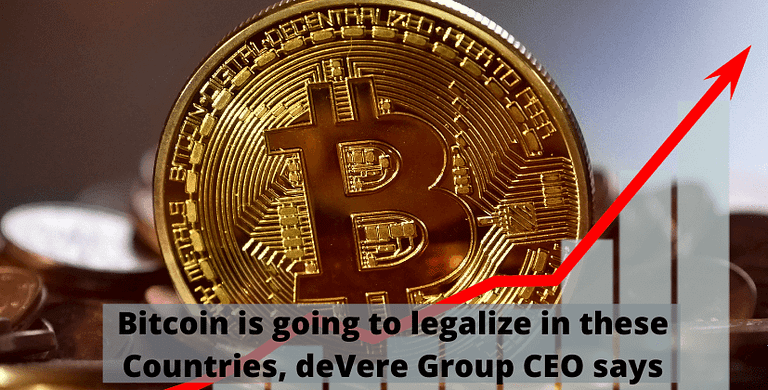 Bitcoin is going to legalize in these Countries, deVere Group CEO says

The Coin Leaks News: A financial advisor firm deVere Group CEO Nigel Green anticipates that two more countries will recognize Bitcoin (BTC) in the form of legal tender by the close of the year.

In a brand new article, Green follows up on his January forecast after news was reported of The Central African Republic this week was the second country in the world to officially recognize Bitcoin as a currency.

“In the month of January I forecasted that at least three countries… will make the largest cryptocurrency in the world legal tender by 2022. The first one has already declared it.

I’m sure that Bitcoin will be accepted as a legal tender in at the very least one greater African as well as one Central or Latin American country before the close of the year.”

Green states that Tanzania is a possible candidate for Africa since in 2021 the country’s central bank revealed that it was in the process of drafting an executive directive to be addressing the issue of cryptocurrencies.

In relation to nations of the Western Hemisphere, the CEO states,

In Latin and Central America, it could potentially be Paraguay or Mexico next.

A Paraguayan bill moving to regulate the trading and mining of Bitcoin and cryptocurrencies in the country passed the Senate in December, which is widely being regarded as the first step to making Bitcoin legal tender.

Meanwhile, I’m confident that a Bitcoin bill will be introduced to Mexico’s Congress this year [because several politicians] are going on record as saying they want their country to follow El Salvador’s example.”

El Salvador became the first nation to accept a cryptocurrency asset as a legal tender earlier this year.

“Adopting cryptocurrency currently is more attractive to those countries with a track record of financial instability.

In nations where the current national currencies don’t work as well as they should as a means of exchange, store of value and as a unit of account… Bitcoin is increasingly seen as the answer.”

The CEO’s final words are:

“First, El Salvador, now the Central African Republic – and this is just the beginning.”