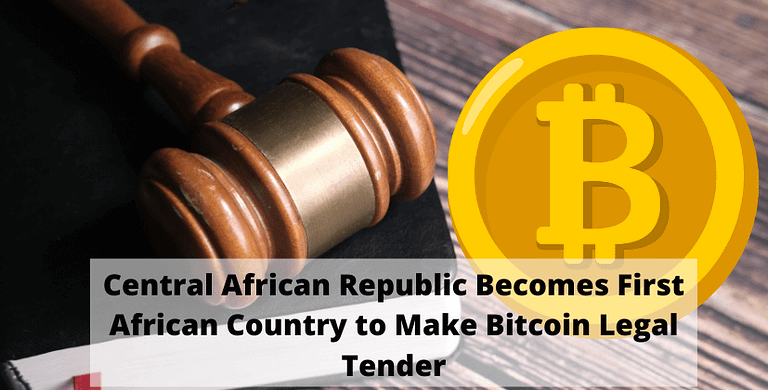 The Coin Leaks News: It is the first time that the Central African Republic has accepted bitcoin as a method for payment. The government’s National Assembly unanimously voted on the bill that legalized cryptocurrency as well as provided a regulatory framework that accepted bitcoin as a legal currency. This means that it the Central African Republic the first country on the continent to recognize Bitcoin as its form of currency.

Its economic situation is desperate need of some help, and the officials of the country have opted to make use of crypto and bitcoin to boost the economy as well as making use of technology to digitize the economy. The Central African Republic joins El Salvador in making bitcoin legal tender and is expected to face scrutiny from international organizations.

The bill’s draft was proposed by the minister for electronic economy, postal services and Telecommunications, Gourna Zacko, and the minister of budget and finance, Calixte Nganongo. A few officials have suggested that investing in the latest technologies and cryptocurrency will bring benefits to people, but it’s not clear what the general implications will be.

In addition to making Bitcoin legal There are a variety of advantages that a government can benefit from to improve economies. Smart contracts can be incorporated into a variety of applications and could increase efficiency and reduce the price of certain basic procedures.

The Central African Republic follows El Salvador in accepting bitcoin as legal tender. This is an unpopular position for the majority of current financial institutions and government officials and they are worried that this could increase macroeconomic risk. In the past, both World Trade Organization (WTO) as well as the International Monetary Fund (IMF) have not been shy about affirming this.

The countries that have made bitcoin legal tender claim that it will enhance their economies as well as usher into a new era of digitalization. It is yet to be thoroughly proven, even though it’s still early in the case of El Salvador, which is leading the charge in this direction.

Other nations will be looking at El Salvador and The Central African Republic for more information about the way their research is playing out. It’s unlikely that all nations will allow bitcoin to be legal tender, however, they’re most likely to be open to crypto and its widespread use. For instance, Colombia is seeing more ATMs that accept crypto.