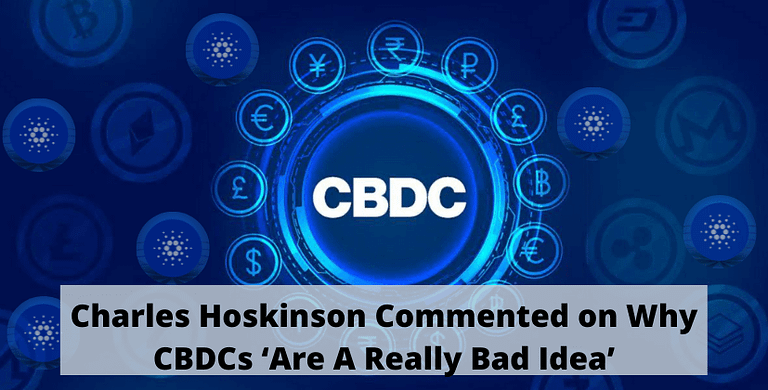 Charles Hoskinson Commented on Why CBDCs ‘Are A Really Bad Idea’

The Coin Leaks News:Charles Hoskinson, Cardano founder, has said that he doesn’t believe in the idea of a Central Bank Digital Currency. Many debates have erupted over excessive government control and privacy due to the growing interest of world governments in CBDC development.

Many governments have been interested in Central Bank Digital Currencies (also known as CBDCs) since the rise of decentralized cryptocurrencies. The central bank-issued currency must be as efficient and affordable as decentralized currencies to remain relevant. This is what governments are starting to recognize.

The idea that citizens could have accounts controlled directly by central banks has raised many privacy and control issues. Some speculaters believe that government surveillance and control of transactions would make it more difficult for them to stop money laundering and terrorist funding.

Charles Hoskinson believes that this is the result of the creation of a CBDC. The Cardano founder, Charles Hoskinson, shared a tweet with the caption “Why CBDCs Are a Really Bad Idea.”

Maajid Nawaz is an activist who was also a guest on Joe Rogan’s podcast. He explained that the G7 (which includes the 7 largest IMF countries in the world) was creating a CBDC because they felt that the days of paper money were ending. The Bank of England officials stated that the CBDC would not be able to be spent on food items or restricted in the event of a dispute between an employer and an employee.

Nawaz said that the CBDCs would be like vouchers, which could only be used in areas where the government permits. The system is similar to the Chinese social-credit system. Nawaz believes people should be prepared for the possibility of governments losing control due to the disruption caused by decentralized cryptocurrency. He expects that the people will win the end.

The Current State of Things in the CBDC Race

These are the worst possible outcomes so now is the time to raise the alarm like Nawaz. All countries within the G7 have yet to launch a CBDC. However, they are all in different stages of research and testing. It is no surprise that China, which is not part the G7, is the leader in CBDC development. This is because it has already been conducting large-scale testing in different areas.

The Fed published its study on CBDC in the early part of this year. It asked the public to comment but did not take a clear position. In Biden’s executive orders, however, the president asked the relevant authorities to investigate the technology’s development.

Senator Ted Cruz and Tom Emmers, a Minnesota congressman, have voiced their opposition to the creation of a CBDC. Emmers tweeted that he was not “behind China on crypto. ” CBDCs were not crypto and are a government surveillance tool. Crypto creates freedom, it doesn’t destroy it.”

The U.S. is not “behind China on crypto.” CBDCs are not crypto – they’re a government surveillance tool. Crypto creates freedom, it doesn’t destroy it.