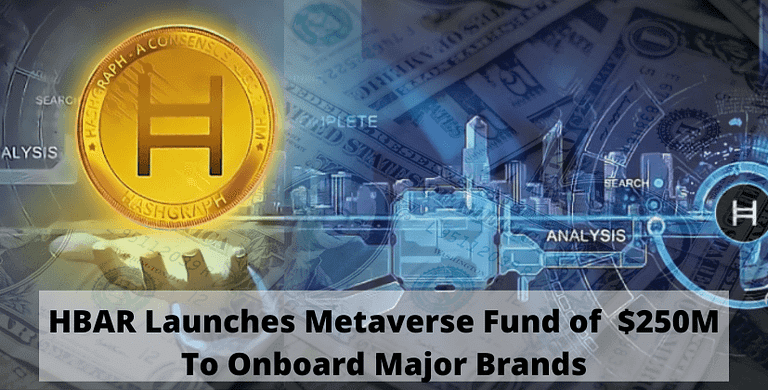 HBAR Launches Metaverse Fund of $250M To Onboard Major Brands

The Coin Leaks News:Thursday’s announcement by the HBAR Foundation stated that $250 million has been set aside for a new fund to attract both consumers and their users into Hedera Hashgraph’s metaverse ecosystem.

According to a statement, the fund is focused on creating a “advanced digital world” and supporting an ecosystem of supporting or complementing projects. It also seeks to support game developers who are interested in joining the ecosystem and introducing non-fungible tokens to the developer’s projects.

Sayl, a customer relationship management platform, has been selected for an undisclosed amount as one of the first grantees. Sayl stated that it plans to be a “leading gateway” for Web3 owners to offer capabilities to “reputable brands”.

Geert Roete, co-founder of Sayl, stated that Hedera was chosen for its enterprise-grade and carbon-negative blockchain. It is also tailored for security and regulatory compliance. This is what consumers and brands are looking for when entering this space.

HBAR announced that its $155 million Crypto Economy Fund was a success and it is hoping its new fund will bring more users and brands onto the network. This fund is aimed at accelerating growth in this fast-paced sector.

Alex Russman, director of the fund, stated that “the metaverse will need robust infrastructure that champions centralization while remaining intuitive to consumers, brands and developers.”

Hashgraph is the only network that uses a Directed Acyclic Graph structure. Hashgraph’s ledger tracks transactions using vertices that are stacked on top of each other, rather than following a data chain like a blockchain.

Critics argue that the network is vulnerable to bad actors trying to influence nodes to transmit false information. Others claim the network is too centralized, but Hedera or HBAR disagree, claiming that both its consensus mechanism and governance model are “highly distributed.”

According to the foundation, the design choice improves transaction speed and efficiency as more transactions are added. Hedera processes approximately 2.6 million transactions daily, with transaction completion times of around 5 seconds.