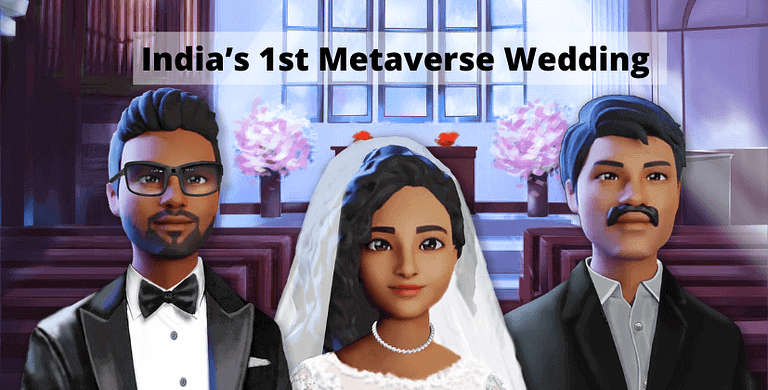 Indians are expressing great interest in elements of the crypto sector, such as non-fungible tokens and the metaverse. Beyondlife.Club has made available NFTs based upon India’s first metaverse marriage. CoinSwitch Kuber sponsored a 12-piece NFT collection that features digital avatars of the Tamil Nadu couple against a backdrop of Harry Potter. This series also includes an avatar of the groom’s late father and a copy of the wedding invitation.

GuardianLink.io launched the collection and received positive feedback. NFTs digital collectibles that have their owners stored on the blockchain network.

“The NFT with virtual avatars for the bride and groom was purchased within nanoseconds of its drop and resold immediately. The total number of 50 copies sold for $10 (roughly Rs. Beyondlife.The club stated in a press release that there were 50 copies of the same. “One of the items was resold for $100 (roughly Rs. 7,489) in less than a second on GuardianLink.io’s secondary marketplace.

India’s first metaverse marriage inspired the NFT auction. This has created a buzz about their upcoming wedding functions.

Janaganandhini Ramaswamy, the bride, and Dinesh Khshatriyan will tie the matrimonial tiara according to tradition on February 6.

The newlyweds and their guests will attend the virtual reception in their metaverse avatars later in the evening. Metaverse, a three-dimensional representation of the Internet, could serve as a fully functional virtual location.

TardiVerse Metaverse, a startup that facilitates virtual celebrations on the Polygon Blockchain has been partnered with the couple.

Research reports estimate that the market for the metaverse will reach $800 billion (roughly Rs. 59,58719 crore by 2024 This sector has seen accelerated growth in India recently.

Last month, Daler Mehndi from Punjab became the first Indian artist ever to perform at a metaverse concert.

T-Series, a music label, also announced earlier this week that it will be joining the metaverse in collaboration with Hungama Digital. Hungama will create NFTs using the extensive catalogue of Bollywood content that T-Series has created.