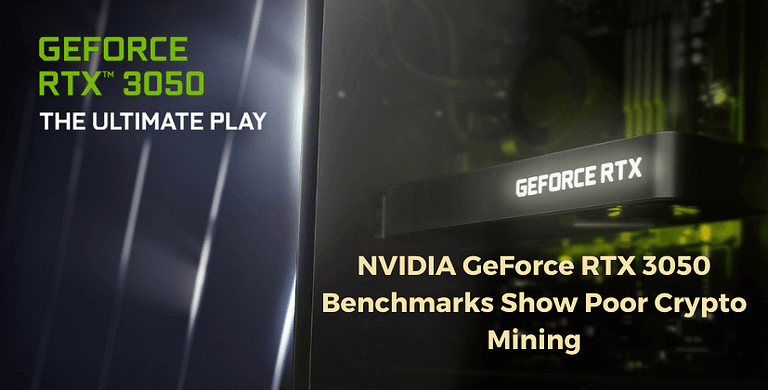 Videocardz recently released the performance numbers for the GeForce RTX 3050 in both gaming and mining, in a multitude of leaks. According to the reports, the graphic card features the Lite Hash Rate algorithm, or LHR, which drops as low as 12.5 MH/s in only a few seconds, and has 73 watts power consumption.

In another leak, it was reported that the graphic card is capable of 13.66 MH/s with a power consumption level of 57W, which can be achieved by tuning the power limit of the card and optimizations to the memory/core clocks.

Depending on NVIDIA’s choice of pricing and the cost of Ethereum presently, it looks like crypto and NFT miners will see ROI of the GeForce RTX 3050 upwards of 500 days at a retail price of $250. If the card retails for $100 more ($350), then the period for the return on investment would be closer to 700 days.

Looking at the dropping value of digital currencies, and with Ethereum transitioning to a proof of stake standard starting June 2022, it is clear that the NVIDIA GeForce RTX 3050 graphics card is a terrible choice for crypto mining.

Besides mining performance, the 3DMark TimeSpy and Firestrike benchmarks have also been leaked by the source. According to the numbers, the NVIDIA GeForce RTX 3050 offers up to 19% boost compared to the Radeon RX 6500 XT in TimeSpy whereas, in Firestrike, the difference is only 4%.

Though that difference is decreased to just 30% in FireStrike. The NVIDIA GeForce RTX 3050 is slated for launch next week on 27th January.