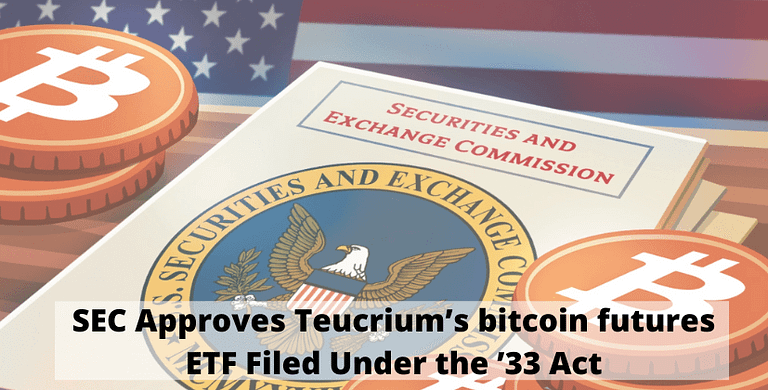 The Coin Leaks News: Teucrium’s Bitcoin Futures ETF has been approved by the Securities and Exchange Commission(SEC). Grayscale Investments CEO stated that this weakens the agency’s argument to ban spot bitcoin ETFs.

Fund group Teucrium is perhaps most well-known for its ETFs in agriculture. Last May was the first time that its Bitcoin Futures Fund was filed. The Securities Act of 1933 (’33 Act), under which spot bitcoin ETFs can be filed, was used to file the ETF.

According to an April 6, filing, the SEC approved a rule change proposal to launch the product.

Although the SEC allowed several ETFs to invest in bitcoin futures contracts, from issuers ProShares and VanEck, those were filed under The Investment Company Act of 1940 (commonly known as the ’40 Act).

Gary Gensler, the Chair of the SEC, stated last August that ETFs that invest in bitcoin futures contracts on Chicago Mercantile Exchanges (CME), would be welcomed by the agency. He cited the law’s “significant investor protections”

Teucrium spokeswoman declined to give details about when the product might launch but said that they were pleased with the SEC’s decision.

Blockworks was told by a representative that they are familiar with futures markets and have a good understanding of the complex regulatory environment that surrounds futures-based exchange traded products. “We are thrilled to be once more at the forefront of product innovation, and we are happy that bitcoin has been allowed to enter the 33 Act landscape.”

Grayscale CEO Michael Sonnenshein stated in a tweet that the SEC cited differences between ’40 Act & ’33 Act as reasons for denying a spot Bitcoin ETF. This was in reference to the latest decision by Ark Invest & 21Shares.

He added that these arguments were now “significantly weaker”.

Sonnenshein wrote Wednesday, “If the SEC feels comfortable with a Bitcoin futures ETF they must also feel comfortable with spot bitcoin ETFs.” “And they cannot no longer justify citing the ’40 Act” as the differentiating factor.”

Grayscale wants to convert its Bitcoin Trust (GBTC), to an ETF — a process that is registered under the 33 Act. The firm expects to make the decision in July. If the SEC continues to deny spot-bitcoin ETFs, it will consider legal action.

Bloomberg Intelligence Analyst James Seyffart tweeted Wednesday that he believed the Teucrium approval strengthened the case for a spot Bitcoin ETF and bolsters Grayscale’s potential lawsuit against SEC if its GBTC transformation is denied.

This approval strengthens the case for a spot bitcoin ETF IMO. If SEC denies @Grayscale’ $GBTC conversion in early July I think this approval also strengthens Grayscale’s APA lawsuit against the SEC… time will tell! https://t.co/dYO1i4nmBe

Seyffart previously mentioned that the Teucrium application could have implications on registration of bitcoin spot ETFs. In a research note last month, he stated that he does not expect the SEC approval of a spot bitcoin ETF before the middle 2023.

Blockworks was informed earlier this week by Sumit Roy, crypto editor at ETF.com and an analyst, that he expects a spot Bitcoin ETF approval to remain “still a way away” regardless of how the agency rules on the Teucrium proposal.

Teucrium spokesperson stated that they were pleased with the filing and “trust that the result will provide insight into regulatory evolution of cryptocurrency ecosystem.”