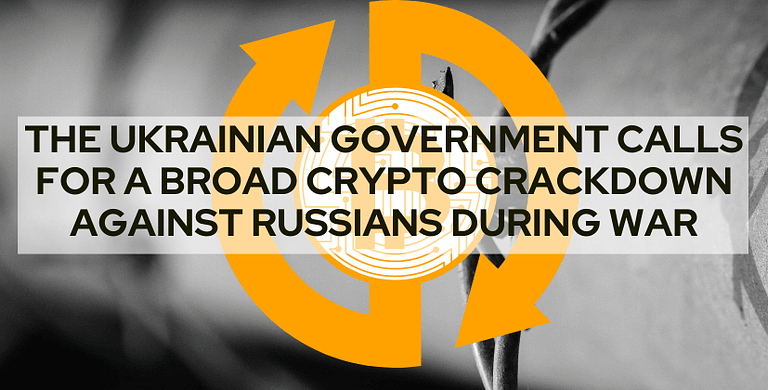 On Sunday, the Ukrainian government escalated its rhetoric towards Russian crypto users by claiming it was time to “sabotage ordinary users.”

Vice Prime Minister Mykhailo Federorov stated on Twitter that he is asking all major crypto exchanges to stop Russian users’ addresses. He had previously sought information on digital wallets that were associated with Russian and Belorussian political figures, and stated that the Ukrainian crypto community was willing to pay a “generous” reward to anyone who gave tips.

Already, the government used Twitter to raise millions of dollars in crypto donations. It also posted in online hacker forums that they are looking for help with cyberattack prevention.

Although it wasn’t clear at first how exchanges would react to Fedorov’s latest call for help, CEOs from several of these companies have publicly expressed their support for Ukraine following the Russian invasion. Binance’s verified Twitter handle posted on Sunday that it was contributing $10 million to the humanitarian crisis in Ukraine. Binance Charity Foundation, an affiliate of Binance, also launched a fund for emergency relief via crypto crowdfunding. In a similar post to his personal account, Changpeng Zhao, Binance CEO, stated that the main focus is on on-the ground support. The tweet stated that “We just care for the people.” Binance didn’t immediately respond to a request for comment on Ukraine’s call for Russian users to be banned.

Artem Afian is a Ukrainian lawyer who manages the effort to obtain information about politicians’ accounts. He plans to publish a list with politicians’ addresses and make it available to top crypto exchanges. Afian stated that the goal is to label these addresses “toxic” and discourage businesses and individuals from transacting business with them.

He said, “We want them to understand that they aren’t welcome in Ukraine or crypto.” Private donations to a fund for tips were primarily in Ether as well as Bitcoin, and other cryptocurrencies.

According to Afian, the data will be shared with Chainalysis, a blockchain analytics firm. Friday’s tweet by the company stated that it was monitoring whether Russian actors use crypto transactions to avoid economic sanctions.

“To the extent that cryptocurrency might be used to evade the sanctions related to the crisis, it would have occurred slowly over the past few months,” Caroline Malcolm from Chainalysis’ international policy department, said to Bloomberg via email Sunday. “Any relevant information about wallet addresses will be added into our products and made available to our partners instantly.”

Western countries, including the US, agreed Saturday to remove some Russian banks from SWIFT. This messaging system allows for transactions between thousands of banks worldwide. This is the latest in a string of international sanctions that aim to isolate Russia from global financial systems. These sanctions are increasing the pressure on Russians to find other ways to move their wealth, including crypto.