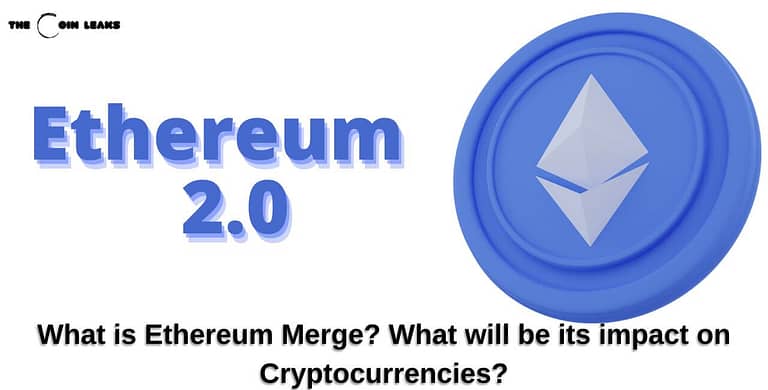 What is Ethereum Merge? What will be its impact on Cryptocurrencies?

A significant event that the cryptocurrency industry has anticipated finally happened the Ethereum’s “Merge,” which proponents believe could increase prices for crypto in the long term and drastically alter the future of crypto.

Merge represents an enhancement of the Ethereum blockchain, which is the engine behind innovation in the crypto industry, such as NFTs, which are non-fungible tokens (NFTs).

There’s been a surge in cryptocurrency investing in recent years and the worth of the entire market more than doubled at one point in the last year, as investors poured their funds into ether, bitcoin, dogecoin and various other cryptocurrency. It doesn’t matter if you’re obsessed with cryptocurrency and keeping up with the latest developments in the field or own a little bit of cryptocurrency through a platform such as Coinbase or Venmo If you’ve heard about the infamous Merge you might be wondering what it will mean for you.

Here’s everything you should be aware of regarding The Ethereum Merge, including what this will mean for the price of crypto environmental impact, as well as other.

What is the Ethereum Merge?

This Ethereum upgrade, or “Merge,” as it’s being called, has changed the way that new crypto transactions are conducted in the Blockchain.

In the past, the Ethereum blockchain, similar to it’s counterpart, the Bitcoin blockchain, was based using a proof-of-work system, which is a system of nodes — the computers which are part of a vast network that compete with each other to solve difficult mathematical issues. The most successful ones are in a position to mine each block transactions and generate new coins.

The upgrade transitioned ETH to the proof-of-stake model, which is a more energy-efficient and environmental-friendly system. The system is based on the selection of nodes through an algorithm which has an preference for those which hold the most of a currency of the network.

That is the “stake” in the network is compensated over the computing power that’s awarded in “proof-of-work” systems.

The Merge” A major update of Ethereum, the Ethereum blockchain platform officially launched this morning after a six-year process

Why the Merge was nessecary?

The change will allow for the Ethereum network to cut down on its energy use by about 91%.

The proof-of-work model, the model that the Bitcoin network is based on, demands significantly higher energy levels than the proof-of stake model. The negative impact on the eco-system of crypto transactions has been a concern for many cryptocurrency critics and advocates alike, and Ethereum’s shift to the less-energy-intensive proof-of-stake is viewed as a significant advance.

It also will lay the stage for the other elements of the network’s road map such as making the transactions faster.

Dose the Merge will effect the ETH price?

The price of cryptocurrency has been put tested this year. After a remarkable year that saw record-breaking prices in November of last year Bitcoin and ether have experienced substantial drops in recent times, along with other financial assets like stocks. Bitcoin has dropped around 58% since the beginning of the year. Meanwhile, the ether price is down by around 60%.

However, this Merge could be a major shake-up in the cost of ether, which was outpacing bitcoin throughout the recent recoveries in crypto.

“ETH has been outperforming bitcoin largely due to news about the upcoming merge,” Ben Weiss, CEO of cryptocurrency ATM company CoinFlip spoke to Money by email in August prior to the Merge. “If it goes smoothly, the merge will be an incredible technical feat.”

The director of research at the investment firm Arca “Katie Talati” told CoinDesk “This is an event that a lot of people are undercounting, especially based on current price appreciation” of the cryptocurrency. “We’re gonna look back on this in a year from now and [realize] we were at the [market] bottom there.”

There is a perception that this change will open greater growth potential in Ethereum according to Stephane Ouellette, CEO and co-founder of FRNT Financial. However, the long-term evaluation of the worth of this change is going to “likely be judged by the subsequent years of development on the blockchain and the applications and technologies which emerge,” he adds.

The Impact of Merge

So, even though the Merge will likely be a good aspect for Ethereum and the people who believe in it in general, investors may need to stay put instead of profiting from the price increase immediately. (This is exactly what financial advisers really recommend — investing for the long run instead of speculating and hoping to get wealthy quick.)

The Merge is a great foundation for future developments that could be implemented through the Ethereum network in the near future, McCann says. In the long term it could be the case as a “positive catalyst” for ether McCann adds.