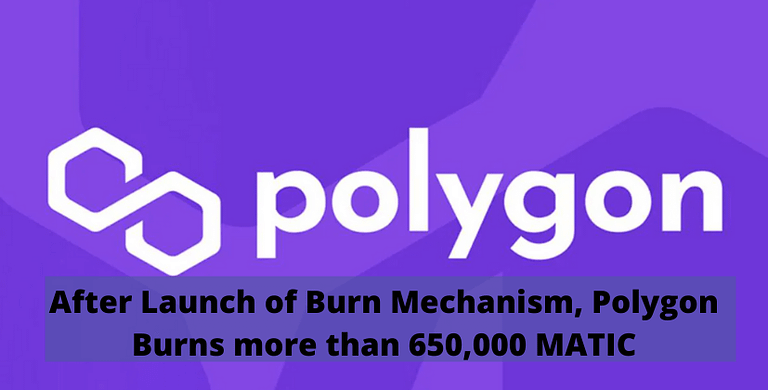 After the Launch of Burn Mechanism, Polygon Burns more than 650,000 MATIC

The Coin Leaks News: According to Polygon updates to the ecosystem More than 650,000 MATIC were burned since the introduction of the EIP-1559 update in the Polygon mainnet in January. As per the Polygon burn website there are 658,345.05 MATIC have been burned to date.

The much-anticipated upgrade EIP-1559 was that was launched in January allows MATIC, Polygon’s native currency, to be burned using three steps. The process begins through Polygon and then processed by Ethereum. It’s like a withdrawal transaction on Polygon however, instead of being accepted by a person using the service, these are burnt and then removed from the supply.

When a user makes a payment for an activity the base fee is secured on the burn contract that is on Polygon as well as the preferred fee is paid to the validater. After MATIC is accumulated in the burn contract users can start the process of burning from Polygon.

Polygon MATIC has a fixed supply of 10 billion. Thus, an annualized burning would be 0.27 percent from the overall MATIC supply, based on an analysis.

This week, the financial services provider Stripe has announced its retailers will be permitted to begin making initial payments using USDC Stablecoins that are native to the network of Polygon.

Polygon has also announced Supernets which is a high-performance blockchain technology that hopes to spur widespread use in Polygon along with Web3. Polygon declares its mission to make it easier for people to adopt Web3 and therefore considers the idea of Supernets as an important step towards achieving this goal, and will commit $100 million to the development and implementation. The money are to be used for development, liquidity mining, research contracts, as well as grants.

The company was founded in February. Polygon has raised around $450 million through a private auction of the native MATIC token as part of a funding round that was led by Sequoia Capital India, with participation from SoftBank Vision Fund 2, Galaxy Digital, Galaxy Interactive, Tiger Global, Republic Capital and other investors.